What are the chances of someone you know being sent over from the UK by the company they work for, to a town only half an hour away from Point Samson?  We couldn’t believe it when our good friend Andrew Smith sent us a message to say he would be in Karratha for the week with a couple of work colleagues to give a training course.

Winston was delighted to see Andy again but I think he was wondering what had happened to Andy’s girlfriend (and Jonathan’s cousin) Sophie.   Sophie was in fact back in Chester, spitting chips at not being able to come too. 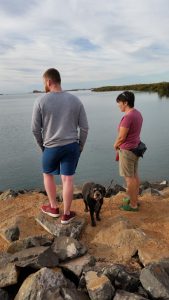 The trio had a bit of time off and were keen fishermen so they drove over to Point Samson where Jonathan joined them.  They caught quite a variety of fish.

The Trevally were big enough to eat and very tasty they were too!

Point Samson is a small coastal town with a tavern, bistro, small general store, some holiday accommodation and not much else.  We booked into The Cove Caravan Park for three days and soon decided to extend for the week.   The weather is perfect, there’s a Woolies a few kms away in Wickham, the beach is only a short walk from our van and there are plenty of good fishing spots nearby.  A lovely place for a relaxing break.

It was also nice to finally have a break from the red dust of the past few weeks.  Everything in the van, including Winston has taken on a red tinge. 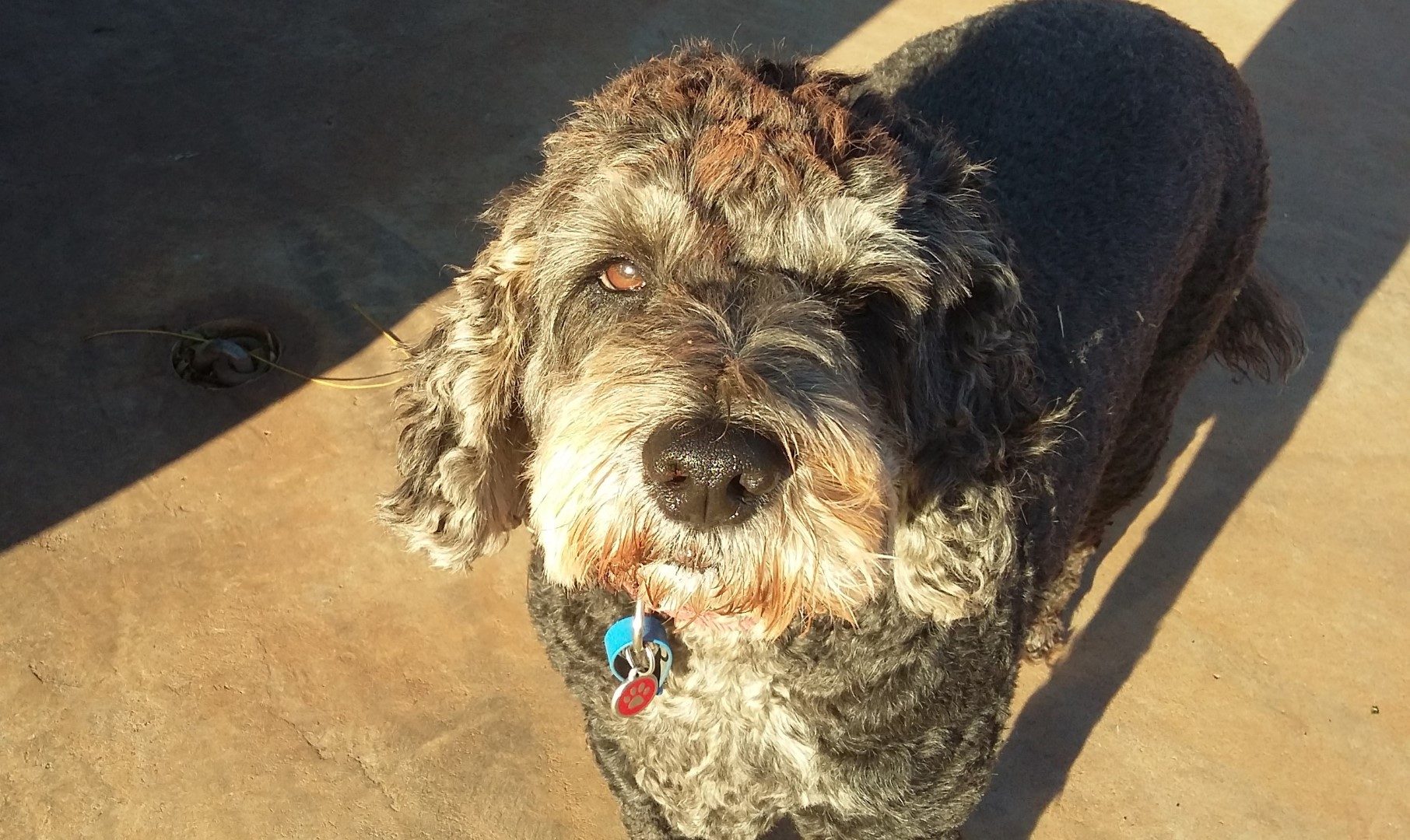 A few kms from Point Samson is the ‘ghost’ town of Cossack.  It was a major pearl diving centre from the 1860s when over 80 pearl luggers operated out of the town.  Once the pearl beds had been depleted towards the end of the 19th century, the pearling industry moved North to Broome. When Point Samson became the main port, Cossack gradually declined and was eventually abandoned.  Some of the main buildings have been restored and also house a museum and you can follow the Cossack heritage trail around the town.

Nearby Settlers Beach was a lovely place to stop for lunch and a bit of a dig.

We had planned to spend the next few days at the beach at Pardoo Station which is 13km off the highway down a very well graded unsealed road.  What no-one had thought to mention in the information was that the beach could only be accessed if you have a 4wd vehicle.  The campsite looked very nice but not nice enough to spend a few days with no beach.

An industrial town and port and although it has some caravan parks, not really a place for tourists unless you’re interested in touring the BHP facilities or learning about the history of the town. We stopped to look at the Dampier Salt Works.  The huge salt mountains dominate the skyline as you drive into town.  The salt is produced by the evaporation of seawater and exported to customers in Asia and the Middle East.  It is mainly used by chemical companies but also as food salt.

Thank goodness Winston was in the van when a white peacock turned up.

As we left Barn Hill and turned onto the Highway, there was definitely a strange noise coming from the rear axle that was quite worrying.  Luckily, we were able to pull straight into a large day rest area.  Jonathan took a look and thought it might be a wheel bearing.  We had taken out break down cover through Ken Tame which is specifically designed for motorhome travellers and gave them a call.  It was decided to send a tow truck and take us back to a mechanic in Broome.

Luckily when you break down in your motorhome, you can have a brew up and lunch while you’re waiting! 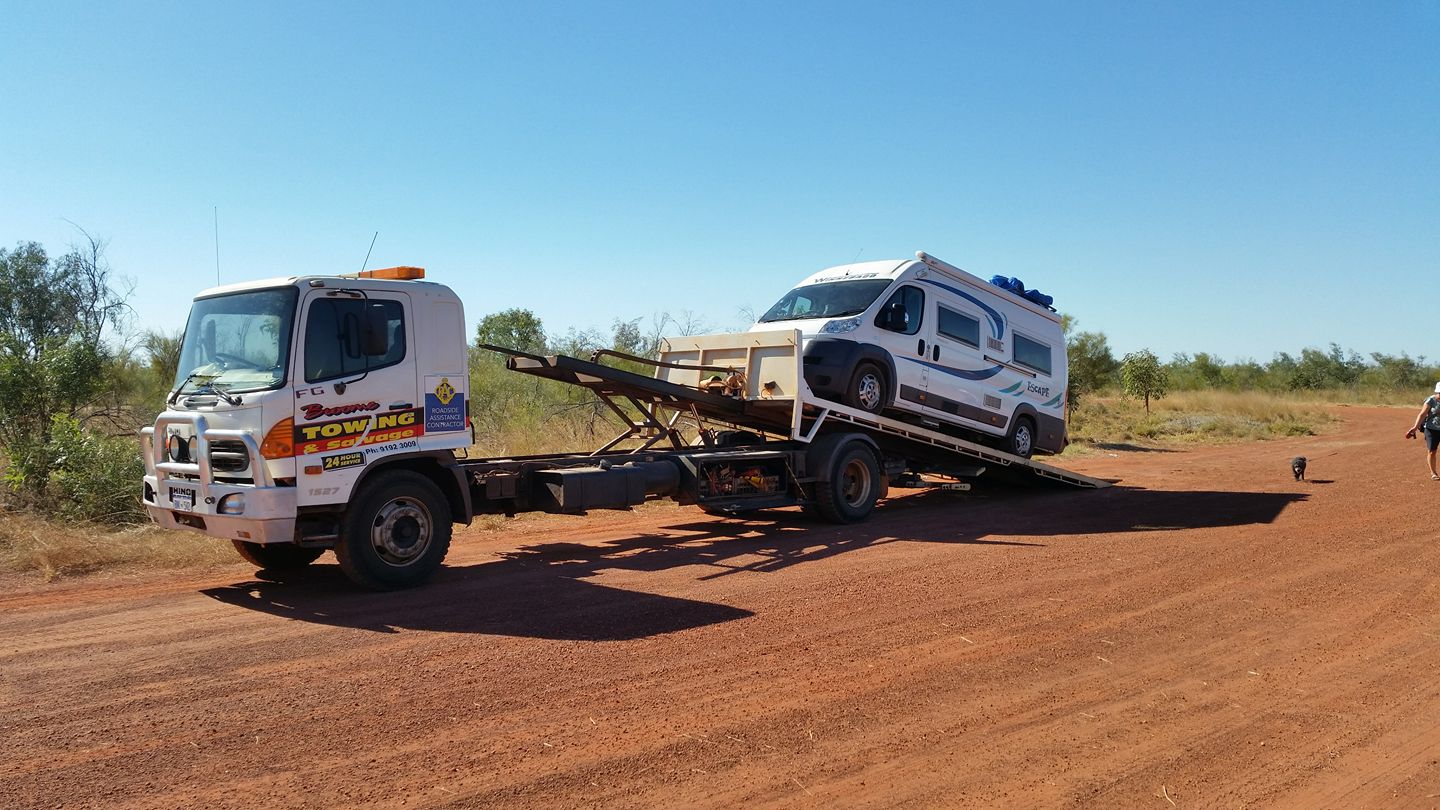 As we’ve discovered before, the mechanics in remote places are very resourceful and quick to find the issue.  They stripped down the rear hubs and discovered a disintegrated handbrake calliper.  They took it out altogether so the van was driveable again but as it was beer O’clock aka closing time, we’re going to head back there in the morning to get the parts ordered.

The good thing about coming back to Broome was that we knew a good place to stay and headed to the Pistol Club again for the night.

On this stretch of coastline, the beach side camps are down unsealed roads off the highway.  Barn Hill is 9km down a well graded road and easily accessible to 2WD vehicles.  The unpowered sites have the ocean views and are first come, first served.  We were lucky enough to get a fabulous spot. 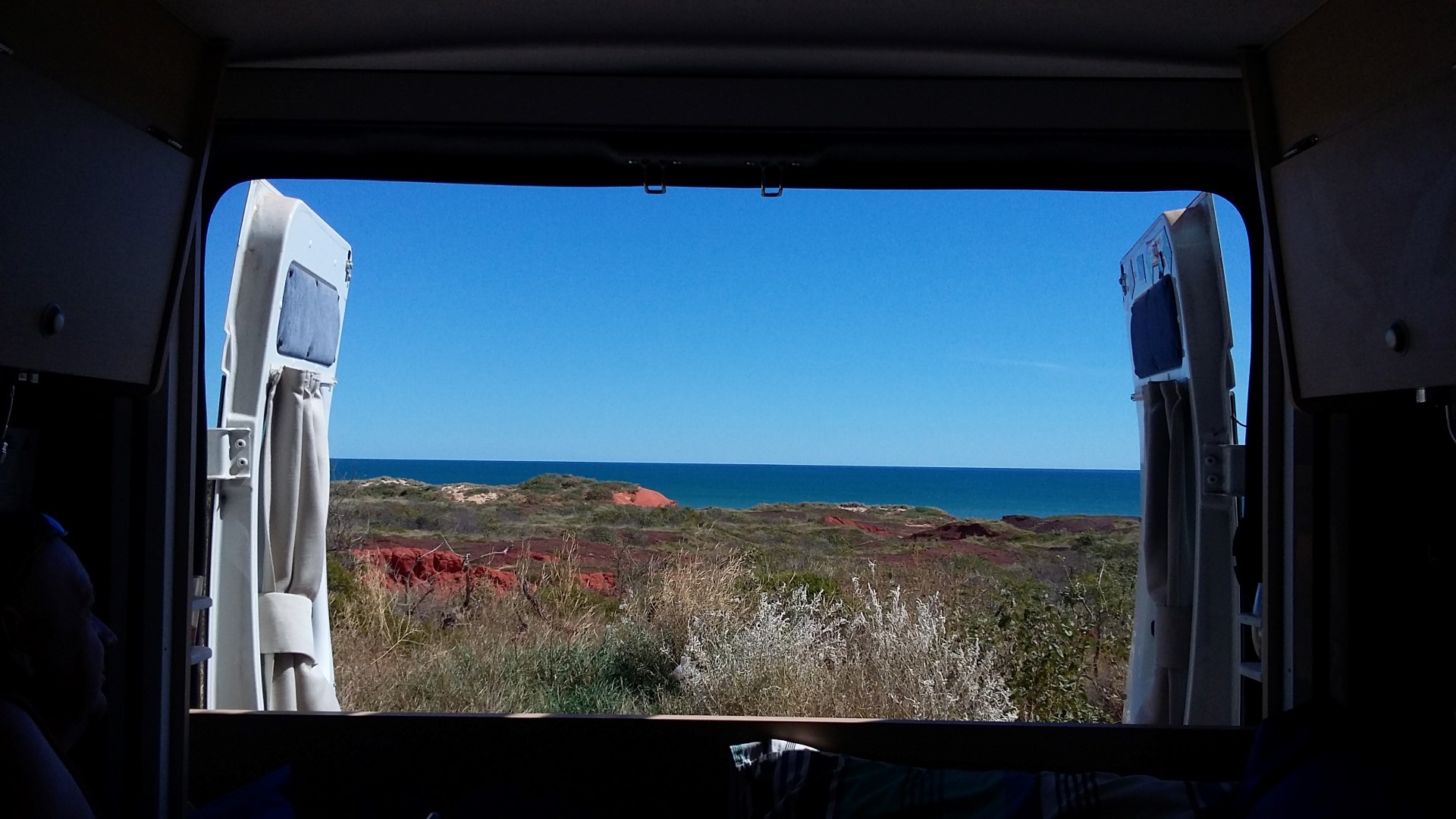 There was a path down to the beach and dogs could run off leash.

The park laid on plenty of entertainment for travellers with a bowling green being particularly popular with the grey nomads.  One of the most popular pastimes was to sit along the back of the vans with drinks and nibbles at sunset and swap travel stories.

There are also plenty of stars when you’re in a remote place. 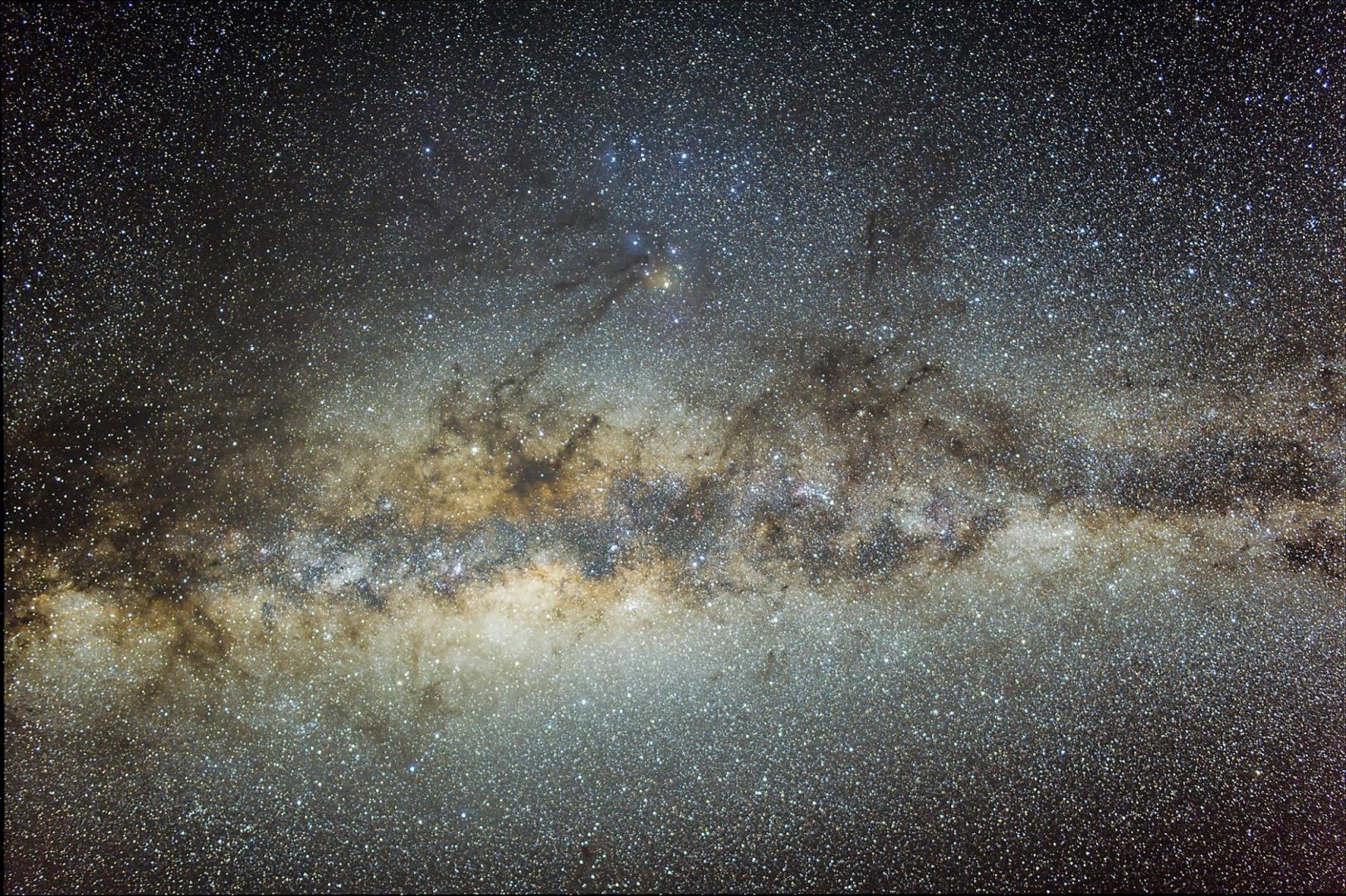 We finally discovered where all the dog owners go to watch the sunset – the beach just North of Gantheaume Point.

The one hour tour at Pearl Luggers was very informative and given by Rachel, a Geordie lass.  A lugger is a small sailing boat with a particular type of sail called a lug sail, and it was these luggers which were used by pearl divers. 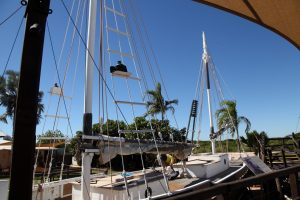 The early years of pearl diving in Broome were shameful times as Aboriginals were kidnapped from the West Kimberley by gangs known as ‘blackbirders’.  They were drugged and put on the luggers and forced to free dive for the pearl shells.  Women who were pregnant were often taken as it was thought they had a better lung capacity.  There is a statue to acknowledge these female divers at Roebuck Bay.

With the introduction of diving suits in the 1880s, divers could go deeper and stay under for much longer which increased the amount of pearl shells that could be recovered.  This pretty much brought to an end the practise of coercing Aboriginal divers and Japanese divers were mostly employed.  It was a highly dangerous occupation.  The suits were primitive and many divers suffered from divers’ paralysis (now called ‘the bends’).  Many became addicted to opium to deal with the pain.  The helmet itself weighed 45kg and if a diver fell over on deck while wearing the helmet it would break his neck.

Pearl shell was highly sought after particularly for making buttons and Broome supplied 80% of the world’s pearl shell.   If a pearl was found when cleaning the shells, it was expected to be placed in a P. Percy Box which allowed pearls to be dropped in but not tipped out.

During WWII, every Japanese person in Broome was interned and this was a disaster not only for the pearling industry but for pretty much every industry in Broome.   As other materials were developed such as plastic for buttons, the demand for pearl shell decreased.

A bit of general travel info:

Broome Shire Council don’t allow pets in any of the caravan parks but they have three sites that are for pet owners only.  The oval at Town Beach has no shade and dogs aren’t allowed on Town Beach.  The Seventh Day Adventist Church site is a small car park in the middle of nowhere. We decided the best of the three was the Pistol Club which has nice shady sites in a quiet bushland setting (apart from Thursdays and Saturdays when people are shooting). 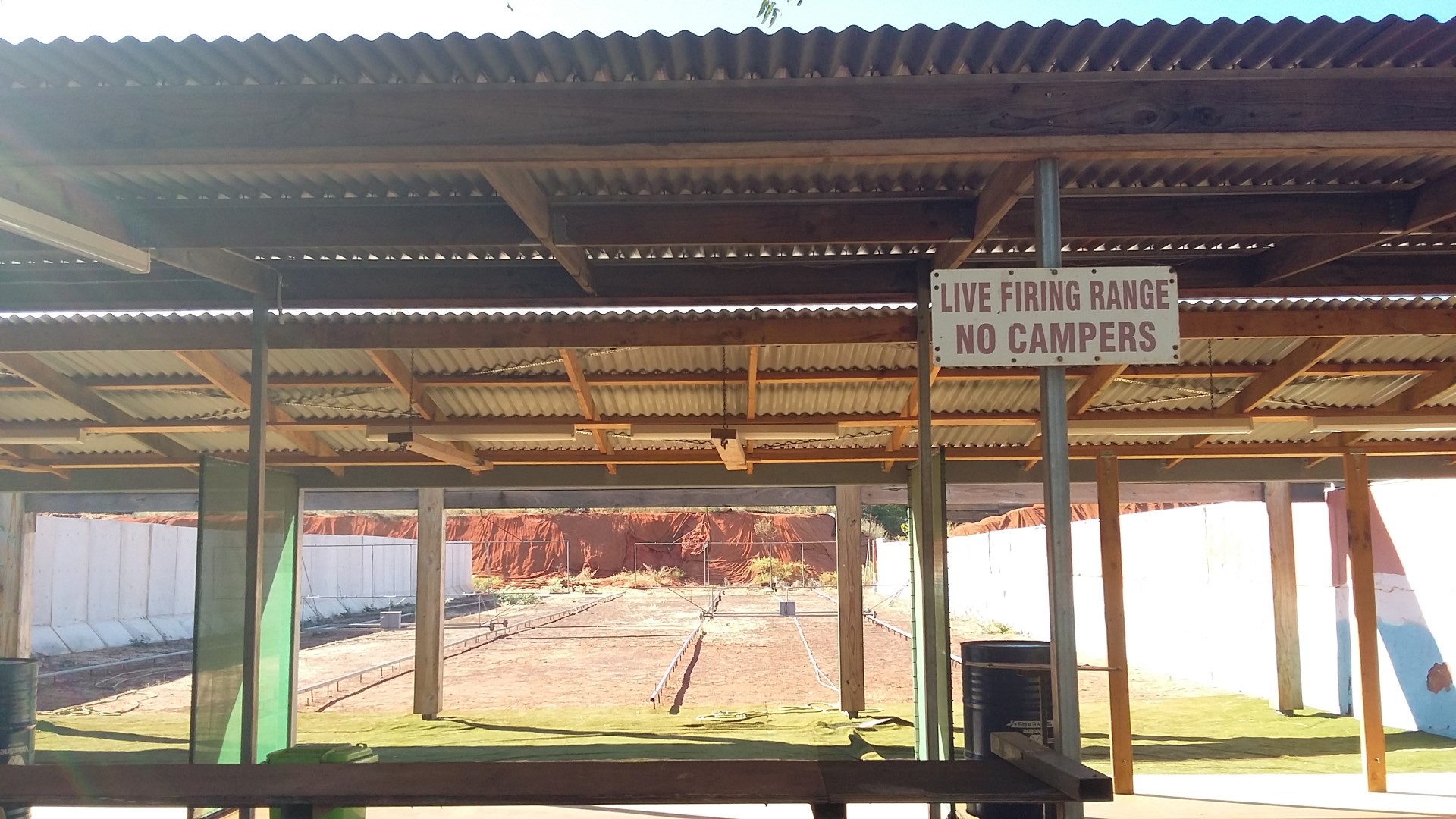 At least they are considerably cheaper than the caravan parks and a few people have said they are squashed in like sardines at the parks.

Broome sits on the Indian Ocean which is a beautiful turquoise colour.  We started out at Entrance Point where dogs are allowed on the beach and Winston was cock-a-hoop.

We were looking forward to a seafood lunch at the nearby Wharf Restaurant but fish and chips cost $38.50 so we gave that a miss.  The main issue with the ocean here are the stingers – box jellyfish and Irukandji, which are most prevalent in the wet season.  As we saw up in Cairns, there are bottles of vinegar along the beach which is used to treat the stings.

We’re looking forward to many beautiful sunsets as we drive down the Western Coast.  One of the most famous places to watch a sunset is on Broome’s Cable Beach, where four wheel drives line up along the beach and tourists can have camel rides.

We spent ages trying to access the section to the North that allowed dogs but kept getting blocked by private properties.  In the end we decided we would have to walk along the main beach to get there and risk getting thrown off.  The part before the dog beach is a nudist beach but there was only one brave man letting it all hang out at that time of the evening amongst all the people watching the sun go down.

We couldn’t do the Gibb River Road of course in our campervan so we headed off down the Great Northern Highway towards Broome.

We took a short detour up to Wyndham, which is the most northerly town in Western Australia.  It was worth visiting to drive up to the Five Rivers Lookout.  The Rivers Ord, Forrest, King, Durack and Pentecost enter the Cambridge Gulf here.   The Port of Wyndham services the cattle industry and the huge cattle yards can also clearly be seen from the lookout.

Wyndham also has a big crocodile in the main street. 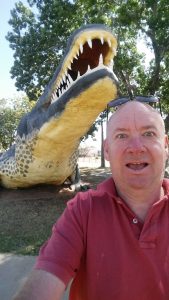 The first part of the highway was very scenic with ranges and interesting rock formations.  We’ve been impressed by the free overnight camps in WA too. They’re off the highway, well maintained, have toilets, dump points, bins and are generally in scenic spots.

The next part of the highway from Fitzroy Crossing only had boab trees and termite mounds for scenery.  A couple of the boab trees were very impressive though. 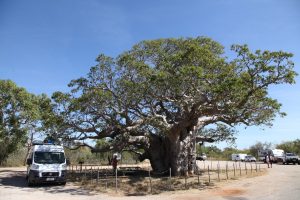 There were also a lot of unfenced cattle we had to be wary of, as on more than one occasion we’ve seen a driver and a cow that have come to grief.

We’ve become a bit more savvy when booking into a campsite now and ask to choose our own site.  Quite often the powered sites are very expensive and you’re crammed into a small space with no views whilst the unpowered sites are spacious and in the best spots.  This was the case at the Lakeside Caravan Park, Kununurra where we chose a lovely spot by the lagoon in the unpowered section.    The only downside – at night we realised just how many crocs were in that lagoon when we shone a torch.

This is just outside of Kununurra and worth a visit.  It’s a concrete causeway across the Ord River.  Water flows over it year round but in the dry season it is a challenge for people to cross in their four wheel drives.   There are saltwater crocodiles at the crossing and the waters are extremely dangerous but it’s still also a popular barramundi fishing and swimming spot. 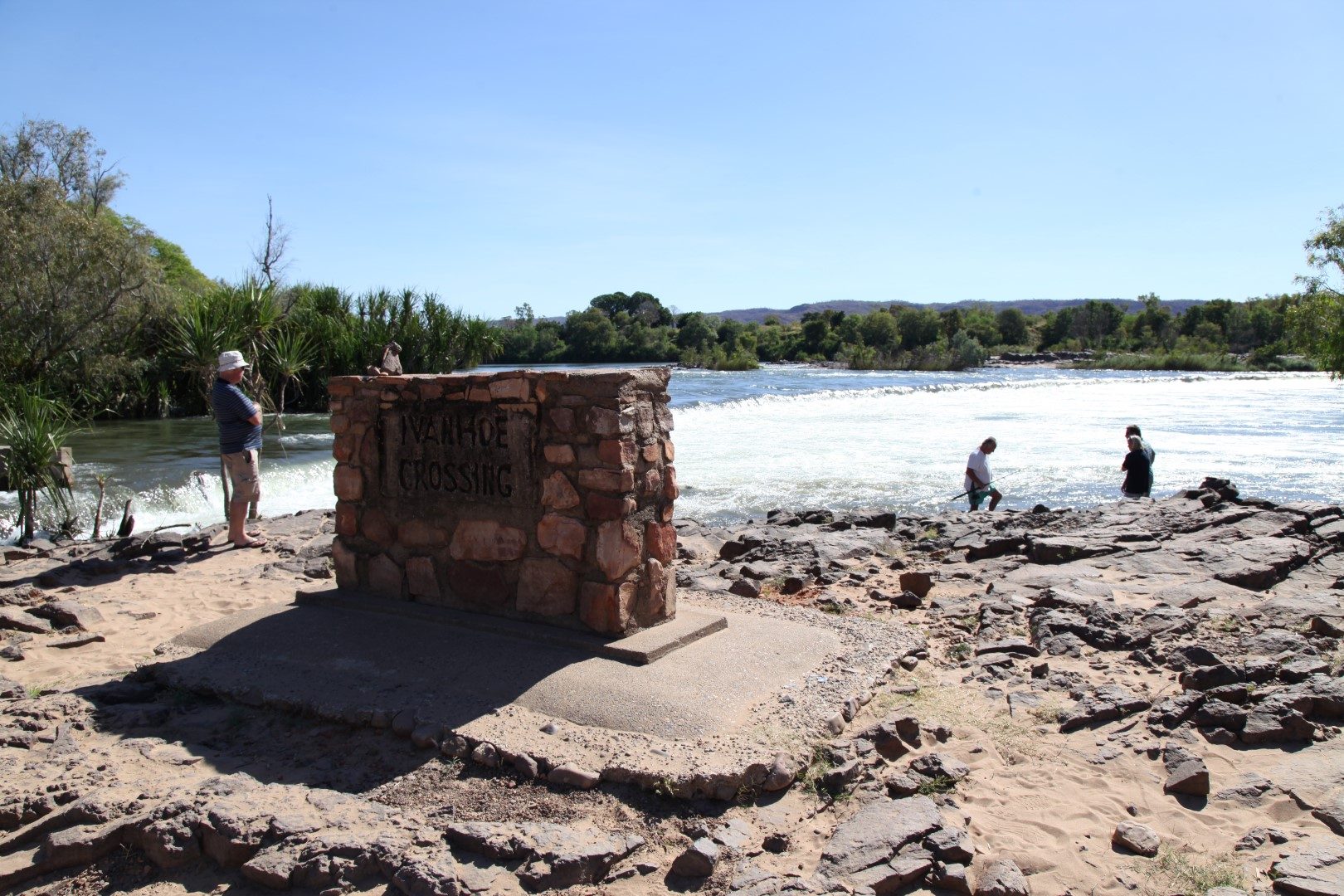 Ask visiting celebrities to plant a tree in your park and put up a plaque. Here’s Princess Anne’s tree:

There were also trees planted by Baz Luhrmann, John Williamson and John Farnham.

The park also has an impressive Boab Tree.  These are common in the Kimberley region. The trees store water in their bottle shaped trunks.  The boab nuts are edible and the seeds can be ground down to make flour. 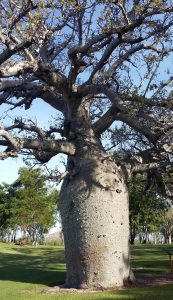 If you have a four wheel drive vehicle, one of the iconic off-road challenges starts here.  The Gibb River Road is around 650km long and takes you across to Derby .