Beaconsfield Mine and Heritage Centre

Gold was first discovered in Beaconsfield in 1847 and led to a gold rush to the town.   It was the mine collapse in April 2006 that brought the town to the world’s attention again.  The Mine Rescue exhibition tells the story of the rescue of miners Todd Russell and Brant Webb.   Visitors can experience the conditions of the underground tomb where the miners waited for two weeks to be rescued.   The exhibition also tells how the town coped with the focus of the world’s media on them.

It seemed a shame though that there wasn’t equal weight given to the fact that there were three miners trapped and Larry Knight was killed in the rock fall.

The museum also houses several local collections including an impressive display of wooden knobs donated by Mr Ray Porter of Beaconsfield made from over 150 different types of timber. 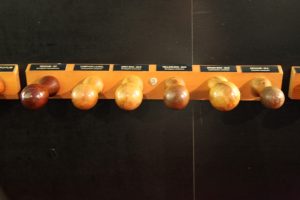 If you like seahorses then this is the place for you.  It’s advertised as Australia’s only working seahorse farm which sounds a bit strange – you imagine them pulling little tractors!  There are very informative hourly tours which end at their aquarium where you can hold a seahorse in your hand.  They’re very wriggly though and I couldn’t hang on to mine.

*the Latin name for the seahorse is Hippocampus.

*the males carry the young

*after being born, the babies (known as fry) are on their own.

*seahorses can change colour to match their surroundings.