The Eyre Highway which crosses the Nullarbor Plain is either seen as one of Australia’s great road journeys or one of its most boring.  The town of Norseman, 190km South of Kalgoorlie is the gateway to the crossing in the West and it’s a journey of 1200km to Ceduna in South Australia.  As we set off, our GPS told us that our next manoeuvre would be a roundabout in Ceduna. 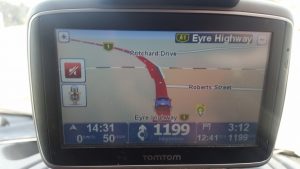 We had been free camping for four days as the weather was perfect but Tuesday was forecast to reach 35 degrees.  We’ve learned to adjust the times we travel so that we’re driving with the air con on during the hottest part of the day.  The first night we stopped at Fraser Range Station which was a very pleasant and scenic stop.

There’s not too much to stop and see along the first part of the highway.  One interesting place is Balladonia.  In 1979 it made the news when debris from Skylab fell close to the town.  The Shire decided to issue a litter infringement notice to NASA (which was later written off).

The Nullarbor Links is the world’s longest golf course.  It starts at Kalgoorlie or Ceduna and there are holes at various points along the Eyre Highway, mostly at roadhouses.  We didn’t bring our clubs with us but there were plenty of people who were working their way along the course.  You can buy a golf score card for about $70 at visitor information centres in Kalgoorlie, Norseman or Ceduna. 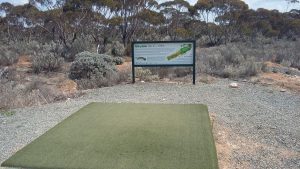 Just outside of Balladonia is the start of Australia’s longest straight road.  At Caiguna, at the other end was a very interesting blow hole which was like a natural air conditioner.   It was a hot day and we would have sat near it for lunch if there hadn’t been millions of flies around.

You also have to put your clocks forward by 45 minutes at Caiguna.  This seemed to make life confusing for everyone at Cocklebiddy a bit further on where they had ‘Perth time’, ‘Cocklebiddy time’ and ‘Adelaide time’.   We were ready to call it a day at Cocklebiddy even if we weren’t sure what time it was.  The van park at the roadhouse is enormous and was empty apart from two vans.  We had to scratch our head at the manager who decided he wanted to put us between a smelly fuel container and a noisy generator.  I very politely told him no thank you.

(By the way, no photos of me today as I was bitten on the eyelid by a mosquito in the night and don’t look my best!!)